from The Environment (Political Climate Crisis) by SEE MORE PERSPECTIVE 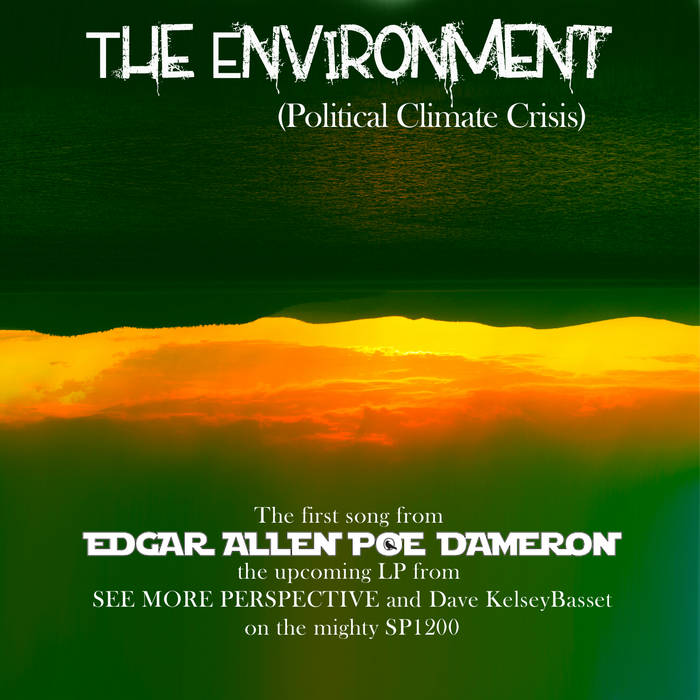 Here's a song from the forthcoming LP with producer David KelseyBasset (aka The Rube). I wrote it 5 or 6 years ago and it never found a home until recently. It felt too relevant not to remix this with Dave, include it on our new album, and release it as a single. It plays with the metaphor of specific aspects of culture as a disease or virus, and how it is talked about by media and government, who's affected the most, and how it spreads. It's both a metaphor and not, especially now.

take a deep breath in, choke on the toxins
don't regulate the waste, there's no option but opt-in
so when the sickly river oil slicks, just walk in;
out of your front door, into no oxygen
poison has rights, toolet it into your bloodstream
politely smile backas it kills with a smug grin
cuz all the mud and grime's just somethin' to get used to
if you don't wanna choose truth, you can get used, too
I'm sure you'd just as soon assume the gloom and doom
as groom the plumes of the skewed and putrid fumes

...as their wretched wings span the skyline
as long as their yours, your response is "well, mine's fine"
so "namaste", "peace", and "ubuntu"
but ain't none of it fair, and ain't nothin' you can do, fool

I'm seein' students in a class, coughin' and sneezin'
makin' each other sick but we ain't offerin' treatment
we're so down on healthcare, but all for policin’
and if we talk about the subject, it's far from the reasons
far from root causes, far from ground zero
a far cry from justice resounds from down below

cancer's just rampant in some areas, right?
maybe it's the culture, just their way of life
that's the shit you hear, when there's no accountability
we're not about the victims, but we're all about the infantry
comin' in to quarantine when there's an outbreak
but who gets the medicine when no one who is brown's safe?
it must be somethin' in our genes, somethin' in our race
that keeps us getting sick, that keeps us in a state

but race is only real as a construct that is laced
in magazines, in news, in a trusted white face
in a place, in a case where a culture is inhabited
by people trustin' in the law, more than law of averages
trustin' news outlets more than people who were there
trustin' news from sources who make money off of scares

beyond compare, it's all but fair, allin the air
we're steeped in the disease, but all we gotta do is care
so we can learn so we can teach to get it in the mainstream
to get the sickness from our stare
and getting' all our brain's clean

SEE MORE PERSPECTIVE is a Xincanx MC, Producer, Spoken Word Poet, and Social Justice Educator. His work explores mythology, science fiction, spirituality, and the paranormal. Find SEE MORE in a cypher or a seance, pushing conversations about social justice, singing for strangers in a living room, or sharing culture, tradition, and craft in a classroom. ... more

Bandcamp Daily  your guide to the world of Bandcamp

New sounds from Mavi, Ivy Sole & Moderator, plus AJ, the One joins the show, for her latest release